Join Us
Our Church & Country are Depending on You

​​Long-term studies have shown that the two most important characteristics of our Catholic identity are our beliefs in the sacredness of the Eucharist and in helping the poor. Helping the poor is more important to our Catholic identity than our devotion to Mary or the pope. Yet this should come as no surprise to us. Jesus was born into poverty and this is basis of the Catholic Social Teaching advocating a preferential option for the poor. Just as the poor and most vulnerable are inseparable from Jesus, so too are they in the hearts of Catholics and all people of goodwill.

It used to be that the light of the Catholic Social Justice Tradition was primarily manifested by the institutional Catholic Church in the good works we have all witnessed in our parishes and on a larger scale, at the diocesan and national level. We were imbued with the good works of Catholic Charities, the Catholic health care and educational system, and the Catholic Relief and Migration and Refugee Services. Many of us did our part through our financial support of these institutions.

However, those days are coming to an end - for a number of reasons. While these beloved institutions still exist, they do so in an environment where the church is not only downsizing but has also become more politically polarized. Accompanying this polarization has been a loss of the collective prophetic voice of the US Catholic bishops.

Since the Great Recession, and during a period of profound economic inequality, the US Conference of Catholic Bishops (USCCB) has been unable to issue a statement in support of the poor because they were unable to agree on what it should say. This is a far cry from only 20 years ago, when the USCCB collectively and unambiguously denounced welfare reform by reasserting their groundbreaking 1986 pastoral letter, Economic Justice for All. 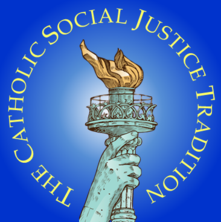 So the torch of the Catholic Social Justice Tradition - the light that Jesus told to us to put on the table - is waiting for lay Catholics to pick up and carry forward. In a very real sense, the Church needs our help as it never has before. And in a very real sense, our nation needs the moral framework - rooted in both faith and reason, and not ideology - that the Catholic Social Justice Tradition provides.

So please join us and help us in carrying the torch of the Catholic Social Justice Tradition high and into the future so that it may be a beacon of light, inspiration, and reconciliation for our church and society in our service to God, one another, and the common good.

Our Church & Country are Depending on You!

Your financial support of any amount is greatly appreciated. Your donation will help us: to advance the Catholic Social Justice Tradition in the public square and within the Democratic Party; to connect the Catholic Democrats national community in all fifty states to take collective action in service to the common good; and, when necessary, to rightfully defend the good names of Catholic Democrats from spurious attacks by those who put politics before their faith.

Our work never ends and we are here to serve you in our service to the common good.